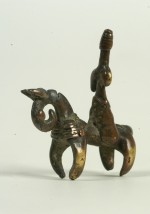 I’ve never been in Africa.

I don’t know how to ride a horse.

I’m not, I presume, possessed.

But I am the greatest expert and most passionate collector

of African Kotoko horsemen .. .. among those of the generation that

Leonardo defines as “… e beh !”, that is, when you hear that one of them has died,

This preamble clarifies the motives and limits of what I’m posting today, Wednesday 17 November 2010.

These miniature equestrian monuments thrill me 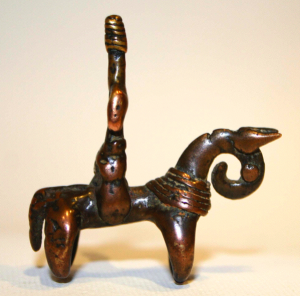 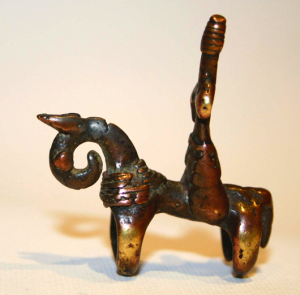 their microscopic monumentality. Tiny, just a few millimetres. But if you display them well, they rapidly and decisively conquer all the space around them.

You’re in front of them exactly like you’re in front of an equestrian monument in the middle of a square. The principle is the Japanese suiseki: a tiny evocative stone, sufficient capacity of concentration and imagination, and there it is:  the gigantic mountain is alive and palpitating before you. It is the same with a Kotoko horseman: you are tiny, he is gigantic. Magic.

visual echoes, school memories, serene hours – Cangrande della Scala, Bonino da Campione, Verona and Venezia.
Gothic and Romantic echoes rather than Classic or Renaissance. Because Verrocchio’s Colleoni in Campo San Zanipolo and Donatello’s Gattamelata at the ‘Santo’,
not to mention Marco Aurelio in the Campidoglio, speak another more cultured language. 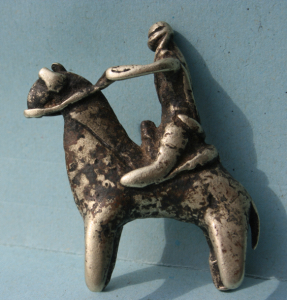 the discovery of non-existent but undeniable elective affinities: the little votive horses of the 9th-7th century Greece before Christ,

the chefferies south of the Sahara,  from the appearance of the first Islamic horsemen up to today ?

And the Tang horsemen?

And this other beautiful Iberian, dated 5th/6th B.C. ? 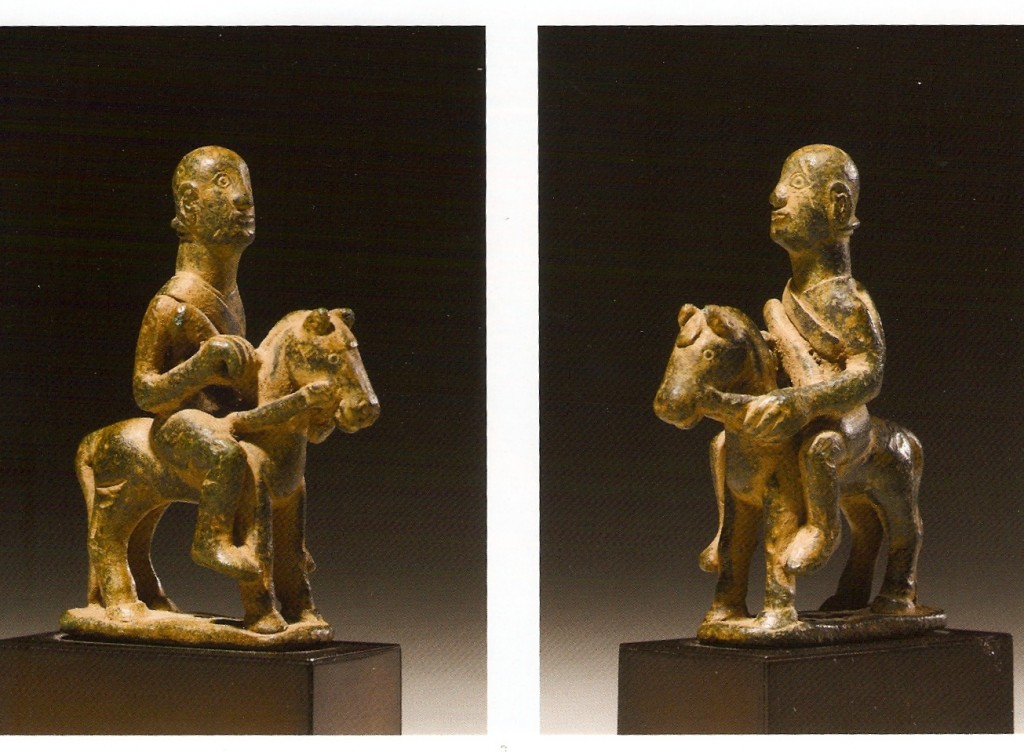 the therapeutic value: not a sculpture, but a medicine

to take every day, day and night, for months and perhaps for years.

Placebo effect or medicine of the future?

topsy-turvy iconography: the horse is not a horse but represents the human being possessed by a spirit;
the horseman is not a man and must not represent a man because he’s a possessing spirit.

irreverent  thoughts : if in the sculptural group the horses represent the women or the men being possessed by the spirit,
then a well-endowed  horse represents a possessed man but not a possessed woman ?

I believed that my love was unique and secret until a few hours ago I discovered an equally ardent love. I can only bow to a passion
expressed with so much intensity, with such an infinite deployment of means and, above all, which creates such an exciting and impelling result.

Useless to waste adjectives : I invite my readers to discover, visit, study and be enchanted by the fruit of a love surely as great as mine :

Title of this posting: “Crazy Horses”.

Title of the book I’ve dreamed of writing for years : “Crazy Horses”.

Because  when a title is beautiful it’s beautiful.

No need to explain it: it’s international, evocative and impelling: it’s centred and has that essential pinch of self-irony. One can’t do better.

Because these minute monumental sculptures really represent a crazy horse ridden by a spirit that possesses it.

Because all of us, adolescents in Paris, with the excuse of fine-tuning our French, dreamed about the Folies Bergères,

But we all ended up, lying about our age, at the entrance to the ‘Crazy Horse’.

Because today I find myself in love with objects representing a crazy horse.

A propos: all of us who are fans of Westerns know about the famous chief, Crazy Horse, but in the Lakota language, ’Crazy Horse’ is ’Tasunke Witko’.

By now it’s habitual, even in the United States, to call the Oglala war chief ’Tasunka Witko’.

But that’s wrong: the correct version is ‘Tasunke Witko’,
where the initial ‘Ta-’ of Tasunke represents the possessive pronoun “his”.
So the correct translation is not “Crazy Horse”, but “His horse is crazy”

And so we’ve come full circle to the Kotoko horsemen: in these equestrian figurines

the horseman represents the spirit that possesses a human being held to be crazy:

“his horse is crazy”.

Naturally, since the game of analogies and coincidences is endless, the big chief, ’Tasunke Witko’, also went into a trance :
so he too, like the men and women for whom the “Putchis Guinadji” (les chevaux de la folie)
were created were in some way subject to being possessed.

Probably I am also subject to possession, thus reasonably crazy,

It’s been years since I don’t leave my house without first carefully choosing one of my Kotoko horsemen,
put it in my pocket and then caress and cuddle it for hours, feeling reassured and protected
in the hostile and dangerous world out there (I live in the Loreto area, and for those who know today’s Milan, that means something).

If friend Pierluigi Peroni, the creator of the marvellous site advised above which has never been praised enough,
wants to co-opt me in his project for a book about the Kotoko horsemen, I’ll participate willingly in his enterprise.

But I will be inflexible about one point: the title is and must be  “Crazy Horses”.