As an open homage to the great Bobi Bazlen and to his “Note senza testo” (Notes without a text), I offer these notes without a text (not yet published) to Nina Sabnani and to her text “Kaavad tradition of Rajasthan”.

It is a real surprise. The handwritten catalogue of the Borgia Museum in Velletri records in 1791 the presence of two wooden painted portable shrines coming from Southern India.

Paolino di san Bartolomeo in his catalogue goes into a detailed description, saying that these two portable shrines were kept in great regard for their rarity.

More quotations of these 2 “kaavad-ante-litteram” (at least in Europe) can be found here :

All these data come and all my gratefulness goes to Professoressa Rosa Maria Cimino,

who wrote the precious text :

The text by Rosa Maria Cimino has 22 black-and-white photos of a small wooden portable painted shrine (cm 183 when totally open, high 60 cm), very similar to a kaavad which, according to the Handwritten Manuscript from the year 1793, was at that time already in the Borgia Museum.

If this Indian portable shrine finds its place in the catalogue written by Father Paolino di San Bartolomeo in 1791, this implies that the shrine was already there for a few years.

We then have a kaavad, probably from Southern India, the Tanjore area, made around

Maria Rosa Cimino also adds the very relevant reference to another 3 portable shrines, in Germany, in England and in Italy. One is in the Staatliche Museum for Voelkerkunde in Munchen. Another is in the Ashmolean Museum of Oxford. The third is in the Ethnologic Missionary Museum of the Vatican City State in Rome and Rosa Maria Cimino wrote about it in

I saw another real kaavad many years ago at the Tropenmuseum of Amsterdam, Netherlands. 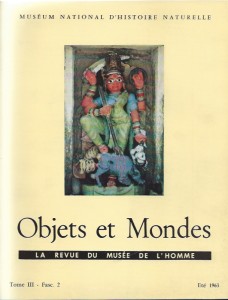 Solange Thierry, with 8 black-and-white photos, describes in detail a kaavad brought to Paris by Professor Jacques Millot in 1961. This kaavad, according to Devilal Samar, had been created in the village of Bassi by the craftsman called Kheradis, who was  following the instructions of Smti Kundanabai. 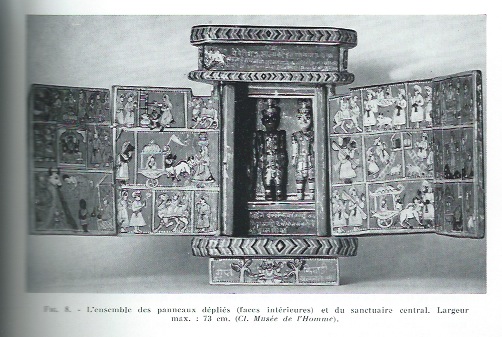 So this kaavad, made and used for many years before his journey to France, is probably dated 1950 or before.

This portable shrine, called “Tashi Gomang”, is actually at the “National Museum & Galleries on Merseyside” in Liverpool (accession number 54.85.40 from the Harry Beasley Collection).

Louise Tythacott in 1998 and Emma Martin a few days ago have been very generous with  informations.

“The Tashi Gomang is of painted wood in the form of a miniature stupa. There are various compartments (or relic chambers) conceiled behind doors, some with images of Buddha.

This kind of portable stupa or shrine was used by wandering lamas or adepts to teach Buddhism to everyday people. It is popularly called a ‘Mani shrine’ as the mantra of great compassion, OM MANI PADME HUM, is the one most often taught to villagers”.

Louise Tythacott then adds : “It may well have had a similar function to the kaavad from Rajastahn that you mention in your letter”.

So, even if quite different in shape and usage from the ones we are dealing with here,
we can dare to called it “a kavad from the Sacred Mountains”.

One kaavad from nowhere. Who knows from where?

Now the photo of a strange object, which I found inside my kaavad papers.

The photo comes from a catalogue of art exhibitions and the only possible, but very doubtful reference could be to an exhibition held at The Nelson-Atkins Museum of Art in Kansas City, MO in1990, with the title of “The Ceramic Art of Joan Mirò”.

I really don’t know if this “kaavad” could really have any relation to Joan Mirò’s art,

even if in the lower central part of it there is something that looks like the Dubuffet urinal.

I would be really grateful to anyone kind enough to tell us who did this work of art,

One name for the kaavad I temporarily own.

To complete my homage to Nina Sabnani, I want to honour once more my dearest Rajasthani brother, Ashya Manvendra Singh.
Here is a photo of him in front of the kaavad (a didactic tool, but not a real kaavad) at the Lok Kala Mandal Museum of Udaipur 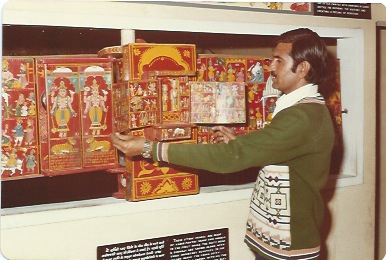 and here a precious paper with his handwriting : 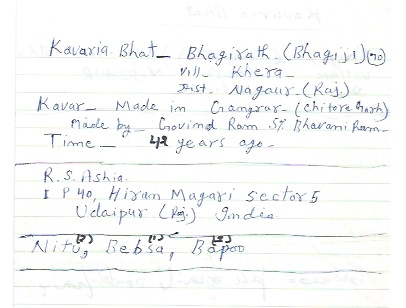 Ashiya is here probably referring to the kaavadiya-bhat we chased for weeks –
Nina, could he be Bhagirath (called Bhagiji) aged 70, village Khera, district Nagaur ? -
and to the kaavad we finally conquered  together in 1970.

Ashya writes “made 42 years ago”, which makes 1927 as a possible year of creation of my kaavad. Older than I am.