With closed eyes, an Old Man looks towards the sun.

With closed eyes, a Child looks towards the sun. 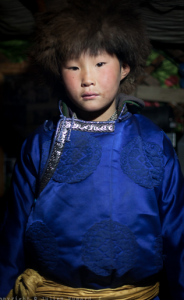 The Child is in heaven, flying from the lonely Tibetan plateaus towards Venice.

Everything is new for the small Tibetan Child.

He has never been in an airplane, never seen an airport.. an elevator ..

a city floating on the water: Venice.

For the Old Man, the unusual liveliness of the beach

at the Venice Lido in these first days of March is a novelty. 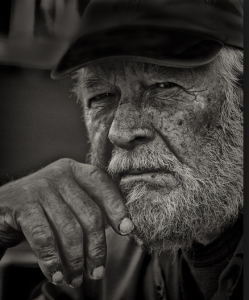 He doesn’t know it, but

is being set up.

The Child and the Old Man meet on the pier.

The Old Man is the friend of a Seagull that will accept from him,

but only from him, the offer of a fish.

The Child is in Venice by himself, with his lovely Kite. 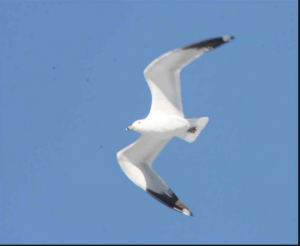 The Seagull, as he flies, is greatly surprised to see his sky invaded

by hundreds of gorgeously coloured kites. His curiosity is aroused.

But he is unable to communicate with these strange birds.

The Child and the Old Man, however, understand each other perfectly
even though one speaks Tibetan and the other an Italian dialect.

A great crowd of the strangest and most unpredictable characters is on the beach :
bearded New Zealanders.. Thais in national costume with impeccable white jackets..
an ancient Japanese man painting ideograms on his kite… 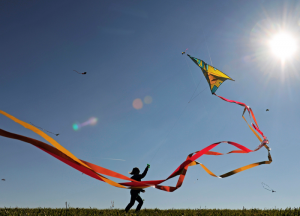 There is absolutely everything: traditional materials used for centuries
and high-tech state-of-the-art materials developed by research and influenced by space flight.

Suddenly, the kites disappear. There is no more wind.

On the beach, the most diverse methods are being used to look for the wind:
a weather station, the airforce… satellites… on-line predictions… even hook-ups with NASA space stations…

But the Child goes to the Old Man.

The Old Man can read mysterious signs in the sky and the sea.

With closed eyes, he feels the voice of the wind. 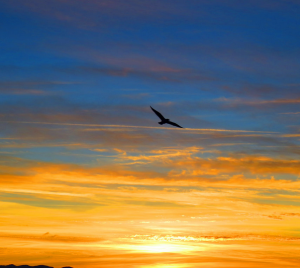 The Seagull is flying high in the sky.

He flies long after the sky has turned red, then purple… and finally a deep cobalt blue.
He is flying alo-…

There rising higher, even higher than the Seagull, is the Child’s kite. 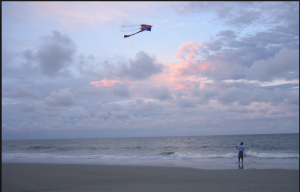 The Old Man and the Child – the only ones – have discovered the wind’s hiding-place.

They are alone in the moonscape of the abandoned saltworks by the sea.

The Seagull flies around the Kite: he tries to win its heart.

Only the Moon and the stars are witness to the Seagull’s poetic dance of love with the Kite.

There are thousands of spectators on the beach. Hundred of kites fill the sky.

The Child’s kite is up there too.

It seems to be looking for just one Kite among the hundreds: the Child’s kite.

And everyone sees that the Seagull begins an incredible courting dance, never seen before, with exactly that Kite. 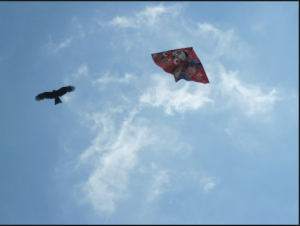 … the string attached to the Child’s kite snaps.

The Kite flies free and the Seagull swoops around and around it.

No one can see them anymore ..

Now the beach is deserted.

The kite-flyers, who came from all over the world, have left. The sky is empty.

The Old Man, alone on the very end of the pier, is waiting for the Seagull.

As always, he has a fresh fish for him. But the Seagull does not come. 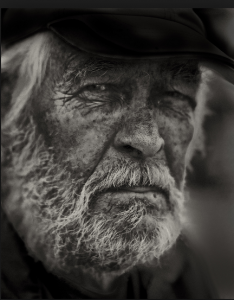 and cut thin strips of reed.. His childlike smile is radiant as he makes a kite for the Seagull.

Then, as he’s cutting the string of the finished kite with a tiny scissors, the Old Man suddenly freezes.

He looks long and carefully at the end of the string he’s just cut.

is the end of another string that the Old Man has just plucked out of the sand.

It’s the string attached to the Child’s kite on that special day.

It’s the string that snapped without warning… 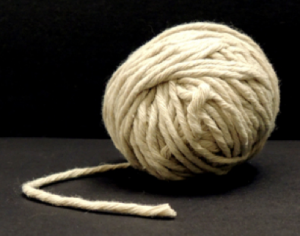 Then the Old Man closes his eyes and remembers.

No, not resees, he really sees for the first time.

There are thousands of spectators on the beach. Hundreds of kites fill the sky.

The Child’s kite is up there too. It flies differently than any other kite.

It seems to be looking for just one Kite among the hundreds:

the Child’s kite. And everyone sees that the Seagull begins an incredible courting dance,

never seen before, with exactly that Kite, 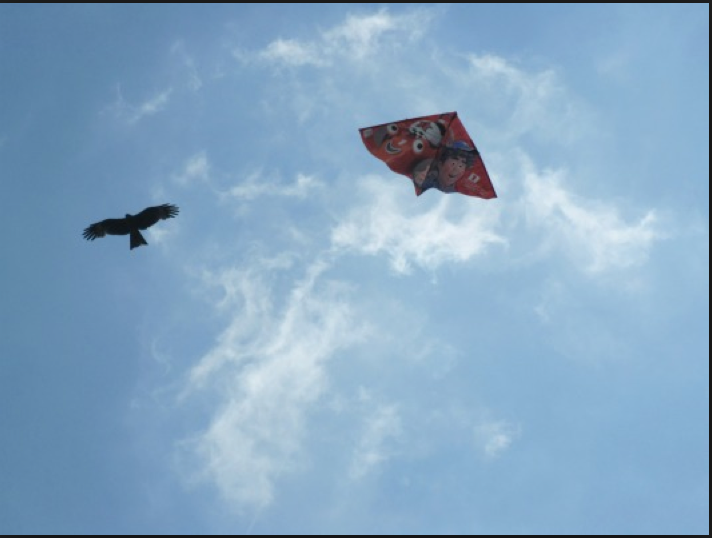 The Child is moved by what the Seagull is doing to win the Kite’s heart.

So quickly that no one sees, the Child cuts the Kite’s string with a tiny scissors:
he gives up what was most dear and precious to let it go free in the sky with the love-struck Seagull :

a cry of disappointment rises from thousands of throats.

The string is cut.

The Kite flies free, and the Seagull swoops around it, expressing all his joy with a repertoire of astounding aerial acrobatics.

The Child lets fall the spool from which the cut string is dangling .. the Old Man picks it up from the sand.

For a long time, the Child watches his Kite and the smitten Seagull as they disappear forever in the sky.

The Child is not sad. Not at all. He’s smiling.

They are no longer visible from the beach. But we can see the Kite and the Seagull flying away

on their poetic dance of love and freedom, farther and farther away, higher and higher in the sky.

They fly past St. Mark’s belltower …they fly high over the Alps sparkling in the sun..

for a moment they’re near the Eiffel Tower and then, immediately after, over the immense ocean…

high over the one work of man visible from the Moon: the Great Wall in China…

With closed eyes, the Child looks up at the Tibetan sky and smiles…

.. now the Kite and the Seagull are in the cosmos… swooping among the stars and galaxies…

.. with closed eyes, the Old Man looks towards the starry heavens and smiles.

of infinite understanding and tenderness, the dream vanishes.

2 Responses to “Eyes Wide Shut. Not even Kubrick flew so high.”